Uechi Ryu originated in China” It’s first name was Pangainoon. Pangainoon means an admixture of strength and softness (half-hard, half­soft). Pangainoon was taught in Fukin province in China at Southern ‘Shaolin Temple’. The Chinese master Shushiwa (1874-1926) used to teach this style. The style was based on the attack and defence methods of Tiger, Dragon and Crane. 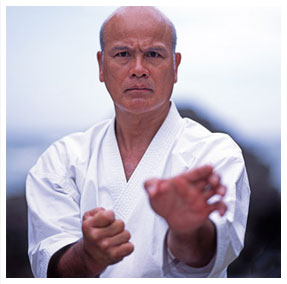 The highest ranked living master Kiyohide Shinjo who was born in 1951. Kiyohide Shinjo was awarded the chmpionshipfor 9 consecutive years in Kata and Kumite in all Okinawa Karate Championship and in known by the name “Superman” Kiyohide Shinjo retired from competition after the death of his father because he had to look after the Kadena Dojo. All Okinawa Karate Federation honoured Seiyu Shinjo after his death by awarding him a 9th Dan.Kadena Dojo is now known as Okinawa Uechi Ryu Karate Do Kenyukai. This name was given to the style in memory of Seiyu Shinjo who died in 1981. Ken means fist, Yu is short for Seiyu and Kai means group. Kadena Dojo is famous all over the world as Seiyu Shinjo’s Iron fist group. 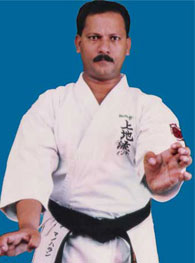