HANSHI NAONOBU AHAGON
Hanshi Naonobu Ahagon was born February 11, 1940 in Kumogi, Naha City Okinawa. Born with a small physical frame and a fragile spirit he wanted to become a strongman (TSUYOSHI). From that motivation at the age of 17 yrs he initiated the study of Karate at a dojo in Nakishi-Cho, City of Naha with Chiosin Chibana O’sensei.After creating a stronger spirit in Karate and becoming very strong he was well known for his great speed, power and inteligence. 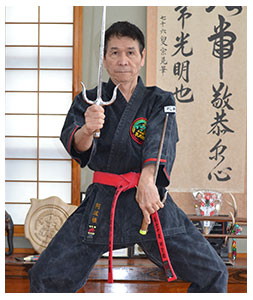 At the same dojo there were higher ranking students such as Katsuya, Miyahira, Shugoro Nakazato and others who served as shihan and sempai who helped instill all teaching of Karate and dicipline, especially the first two named above (Shihan-Dai). After 4yrs of training in the Nakishi-dojo, Chibana sensei moved to Shuri-tori Hori-Cho, which became the new dojo. Due to the distance for Ahagon, he began to study at Shugoro Nakazato Sensei’s dojo in Asa, same city in Naha.
Chibana Sensei delegated responsibility to Miyahira and Nakazato. By then Shugoro Nakazato had Kobudo training and Naonobu Ahagon incorporated Koboudo as part of his training to better his base in Karate-Do. This was in May, of 1961 after the passing of Chiosin Chibana Sensei (February 26, 1969) Katsuya Miyahira Sensei automatically became in charge (Dojo Cho) of all students (SHEITOS) at the school of KOBAYASHI-RYU. From August, 1970 and September 1974 Ahagon Sensei received promotions to Go-dan and Roku-dan along with the title of Shihan-dai from his instructors Miyahira and Nakazato. During the month of October 1974 Ahagon Sensei starts his new dojo and begins to share his training and knowledge in Karate-do. In April of 1977 Ahagon Sensei was promoted to Go-dan in Kobudo by Shugoro Nakazato. In June 1981 he was chosen (SHUSHIN) arbitrator for the Okinawa Karate-do kumite championship 2nd annual Okinawan Karate Kobudo Kumite Championship.

In September, 1981 he received a promotion to Nana-dan (7th) from Shugoro Nakazato Sensei and the title of Kyoshi from The Okinawan Shorin-ryu Shorinkan Kyokai. The following year (1982), he received another promotion to Roku-dan (6th) from the same organization and the title of Shihan-Dai, instructor in Kobudo. In 1984 Ahagon Sensei organizes a Karate, Kobudo tournament for his 10th anniversary for the establishment of his dojo. In 1985 he received a promotion to Nana-dan (7th) and the title of Kyoshi in kobudo. During 1987 he was the arbitrator in the 3rd annual Okinawan Karate Kobudo Kumite Championship. April of 1989 Shugoro Nakazato Sensei promotes Ahagon Sensei to the rank of Hachi-dan (8th) Kyoshi in Karate and Koabudo. July of 1991 he officially establishes the organization REIHOKAN-KYOKAI in KOBAYASHI-RYU Shorin-Ryu Karate-Do and establishes himself as director (Dankyu-Incho) and main Chief of the organization (Shinza-Incho) a title that permits him to sign, award and oversee all Kyu ranks and Dan ranks to Instructors.In August of 1993 he attended a Golden Masters Tournment(In Pasadena, CA U.S.A.) in exhibition of traditional techniques of Karate from Okinawa. He was also named as a model example (Mohan-Embu). He also participated in a brillant Karate, Kobudo demonstration. In February 1994 the Okinawan Kokusai Budo Karate Renmei, granted him the superior rank of Ku-dan (9th) in Kobayashi-ryu Karate-do and the title Hanshi, also the rank of Kudan (9th) Hanshi in Kobudo.

In September of the same year the organization Okinawa-Ken pre-world Okinawan Karate, Kobudo championship (Sekai-Taikai). Ahagon Sensei was named special member of the organization (Senmon-Inkai) they awarded him the title of director of all (Shinpan-Shoku) arbitrators, judges and assistants.

In April of 1995 Kobayashi Shorin-Ryu Reihokan Kyokai celebrated the 20th anniversay of the establishment of Ahagon Sensei’s dojo with a tournament and exhibation in Karate, Kobudo demonstration (Embu-Taikai) In October of 1996 a commerative 100th anniversary of Okinawan immigrants in California, Taikokan (College of Hito Sacramento) were Naonobu Ahagon Sensei gave a outstanding exhibition of manfest, previously more than 30 particpants turned out in his seminar in the same place. In May 1997 there was a sports center for kids and students exchange tournament in Naha City, Ahagon Sensei was chief & director (Shinpan-Cho) of tournament. In August of 1997 the Okinawan province organizes a world tournament of Karate, Kobudo in (Kenristu-Budokan) kata, kobudo, kumite in Naha City Okinawa.

He was a tournament official and carrying out duties as (Shinpan).In February of 1999 from the same organization for kids and students Taikai-Koryu he was (Shinpan-Cho) chief of arbitrators and judges. In August of 1999 the 1st Dekai-Takia Okinawa traditional Karate, Kobudo world championship torunament, he was chief of control and planification.In August of 1999 the Kokusai Budo Karate Renmei is chief and director of all Okinawa Karato-do lineages, Shorin-ryu-, Goju-ryu, and Uechi-ryu. In the union of Karate-do & Kobudo in the City of Naha, he is the vice-president currently under all styles of Karate, Shorin-Ryu, and Uechi-Ryu. He is also a member of the board in Okinawa province Karate-Do union. 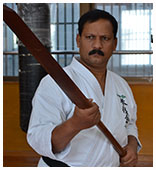