Kalarippayattu is said to be originated about 11th (Eleventh) or 12th (twelfth) century A.D. This Martial Arts became most popular at the time of the legendry hero Thacholi Othenan. Who was born in 1584, and shot dead at the age of 32 (Thirty two) by his enemies trap. Even now he lives in the minds of the people of Kerala through the heroic ballads, popular in this area. He was considered as a complete man of Kalari. He was the superman in this field.

The length of traditional Kalari is 42 feet, width 28 feet and depth 6 feet. Soil floor is another peculiarity of Kalari. Poothara is considered to be the seat of Divinity. It situate in the south – west side of the Kalari ( Training centre). There will be a temple and pond near the traditional Kalari. After training the students used to swim. The trainees used to apply specially prepared herbal oil all over their body. The trainees used to wear a special type of cotton cloth over the privities only called ‘ konakam ’. In the childhood it was a must that all the people (male/female) should practice these Martial arts along with their school education. 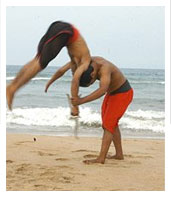 The glory of Kerala’s traditional Martial Art was diminished due to the attack of the king of Mysore Tippu Sulthan, an invader who tried to become this king of kings. In front of his cannons and guns this traditional Martial Art could not withstand. It becomes a part of the luxurious items of landlords and decorative instruments for temples. This style of the body fight gave way to guns and cannons.

Teenagers must do all exercises of this system regularly at very early in the morning, but in case of girls when they complete their teen age they should stop practicing this exercises due to some cultural problems. They feared that this might cause some problem for their normal delivery.

Domestic and public entertainments celebrated in ancient Kerala include Martial Arts as in the festival of ‘Mamanga’. It is clear that people of that age had given such an importance to Martial Arts that each and everyone practiced them daily. There are some quotations relating this Martial Art in oriental memories written by Barbus and the remarks regarding Kalari in the Udayemperoor Sunnahadose, the notes of the Portugees Viceroy, Sequira (1519) and the reports of Sir. Thomas Manroe are also to be noted.

FOUR DIFFERENT EVENTS INCLUDE IN THE KALARI SYSTEM:

MEITHOZHIL OR MEIPPAYATTU
Mei means body, Thozhil means exercises. This is pure Physical exercises practiced for achieving body conditioning or physical fitness and for getting flexibility in basic movements of all other fighting and defending techniques.

KOLTHARI
Koal means stick, Thari means fighting. In Kolthari different kinds of Bamboo sticks are used. It is a second branch of Kalarippayattu due to the use of different sticks it had got the name Kolthari. The important items practiced in Kolthari are Kettutharippayattu (using small sticks), Pandheeranveesal (using long sticks) and Ottakol Payattu (using curved deer horn pointing the vital points of human body).

UNKATHARI
Unkathari is a third branch of Kalarippayattu. Its is a system of fighting with the help of mighty weapons, (sharp weapons such as Val (sword), Kundham (spear), Khadara (dagger), Urumi (ribbon sword) are used.

VERUM KAI MURAKAL (EMPLY HAND TECHNIQUES)
Attacking the enemies who are with or without weapons or for self defense it includes locking techniques also like Jujutsu, Aikido etc. 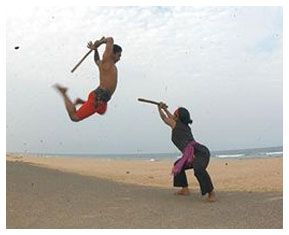 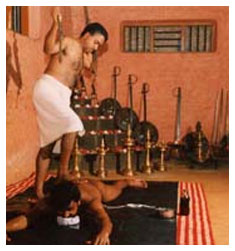 Muscles of the body get stiff by Uzhichal. The excercises of fat and many other unhealthy contents of the body will be cured. By Uzhichal the skin gets enough thickness. It increases blood circulation and Vein functions very well. It also cures tiredness due to hard work and makes them always enthusiastic.

Herbal oil obtained by squeezing various green leafs is applied to the trainees body and then with the help of hands and legs Uzhichal is done by the Gurukkal (Teacher).

Uzhichal is done for two purposes for body safely from illnesses. The parts of the body can twist as he like with the help of Uzhichal. This Martial Art includes treatment together with exercises. This Martial art is still teaching in Kerala on a large scale.